The History of Coeur d'Alene, Idaho 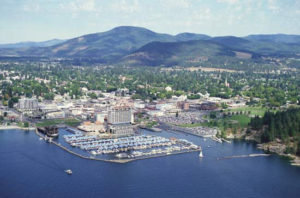 Origin of the Name

Coeur d’Alene is a French name that translates to "an awl’s heart" in English. The choice of name was a deliberate attempt by French traders to describe the amazing trade skills and practices of the people of Schitsu’umsh. They used special tools called alms to pierce and make leather products. The French traders believed that the Indians had shape skills like the awls they used. The city developed after its establishment in 1878 to become an important trade center and a navigation hub.

Since its establishment, Coeur d’Alene served as a transport hub that linked smelters in others states to the mines near the Silver Valley. Transport services were mainly done by steamboats and railroads. There was a significant trade boost in timber that led to population increase in a span of 10 years into the 1900s. The timber boom led to a 16-fold population increase.

Development of Coeur d’Alene started near Fort Sherman (formerly known as Fort Coeur d’Alene) in 1878. It became an important area in Kootenai County after the relocation of the county seat to Coeur d’Alene by a majority vote in 1908. By 1910, the city had established its infrastructure as railroads, telephone lines, banking institutions, churches, grade and high schools, hotels, and a movie theater served a population of 8,000 people. The railroads connected Spokane International, Milwaukee Road, Inland Empire Railroad, and the Northern Pacific. Coeur d’Alene grew to become the social and economic hub for Kootenai County by the early 1930s.

Economic growth was widespread in the city as there were four lime quarries and five kilns to process lime in Bayview, and six lumber mills in Harrison. Movement of goods was boosted by a network of four rail lines connecting the mines with processing plants and the markets.

By 1970, Coeur d’Alene had a population of 16,000 people and a business empire. A number of recreation facilities and activities that took place led to a significant rise in population to 34,500 in 35 years.

Why the City Stands Out

If an individual thinks of the best way to mix business with recreation, then it would definitely be Coeur d’Alene. Shopping malls, restaurants, festivals and concerts just to name a few, act to provide the local administration with economic impetus to steer the remarkable growth since it came into existence.

Cataldo Mission, which is a state-owned building, was set up in Idaho in 1853. It is the oldest building still standing in Coeur d’Alene, ID  and acts as another tourist attraction site.

The city has a serene environment as well as the captivating beauty of Lake Coeur d’Alene. Tourists travel in flair to the welcoming City Beach to participate in water activities like parasailing, skiing, seaplane ride, and fishing among other water activities. The 25-mile lake with a coastline of 135 miles is 120 feet deep. The city continues to develop with more economic prosperity expected into the new millennium.

Coeur d’Alene is 40 miles from Spokane International Airport with 65 non-stop flights on a daily basis. The flights connect the city to other major cities like Los Angeles, Chicago, Las Vegas, and Seattle, among others. The rich background of economic activities: mining, logging, lake steamers, and fur trade explain why people visit Coeur d’Alene.